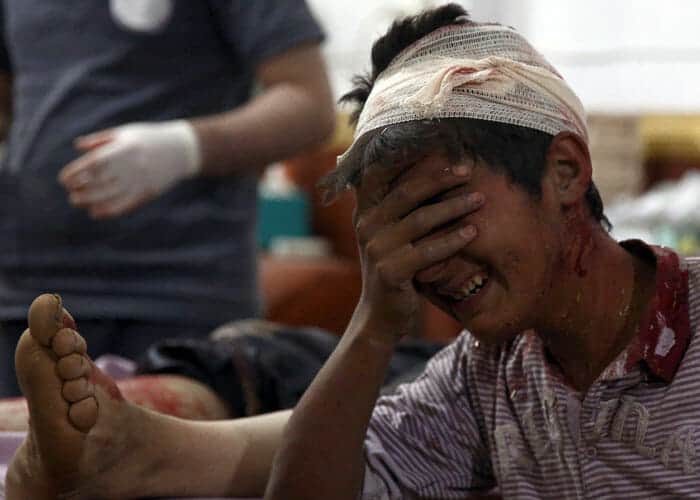 Four children along with their father fell victims to a new deadly Russian airstrike on a residential area in the western countryside of Deir Ezzor today.

Russian warplanes conducted an air strike on a civilian home belonging to the family of Mohamed Hamadi Al-Abid Al-Qadir, resulting in the deaths of Mohamed Hamadi along with his four children and severe injury of his wife.

On the other hand, the field hospital in the town of Al-Kharita-Tahtani, was also bombed with two missiles launched from Russian warplanes, leading to the deaths of 50 head of cattle near it.

A Russian warplane conducted an air raid on a residential area in the town of Al-Kharita-Tahtani in rural Deir Ezzor, causing the deaths of a civilian named Mohamed Hamadi Al-Abid and his four children, media activist Mohamed Hassan said.

The town is devoid of any ISIS presence, and it was bombed by Russian warplanes as a revenge on civilians in Deir Ezzor, who are paying the price of recent ISIS advance in the province, Mohamed Hassan added.

Both Russian and regime warplanes have recently intensified their air raids on the rural areas of Deir Ezzor. Tens of air raids have been conducted on the region since two days, causing massive civilian casualties.

It is worth mentioning that ISIS still hold the areas it seized from the Assad regime over the past few days, and the group has published video footage and graphics showing tens of regime forces, which were captured by the group in the western countryside of Deir Ezzor.