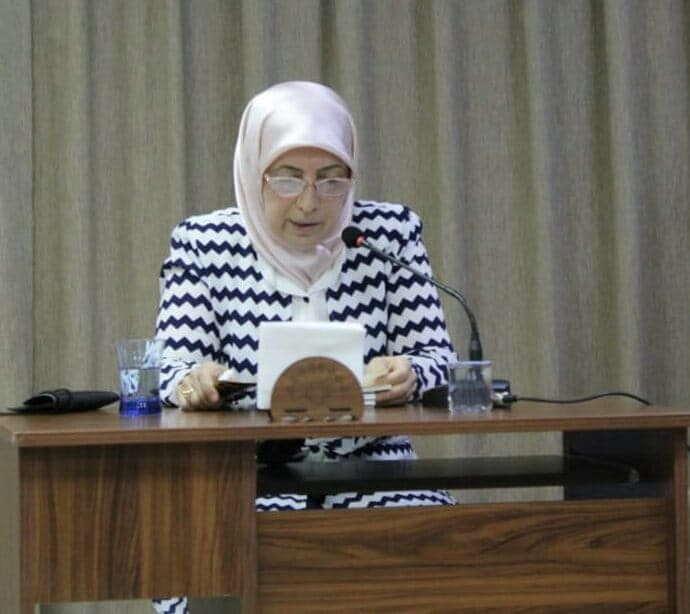 By holding on to her dream, and working constantly to achieve it, Shaza Barghout was able to find her way while being in a conservative environment, and prove herself as a writer in a world full of male competitors, amid the decreasing number of readers. She is self-educated, who was able, by reading and determination, to reach her goal and surprise all when publising her first book “Euphratian stories” in 1994, as she had had no presence on the literary scene before,

Barghout has the qualities of Deir Ezzor’s women inside her, combining the authenticity of the countryside and the modernity of the city, as a result of her long stay in Deir Ezzor countryside. She combined the standard and the slang language in her stories, which makes her an ambassador for the dialect of Deir Ezzor. She also wrote a collection of popular poetry. She was able to write about the Euphrates and Deir Ezzor, and document a period of the city’s literary history.

– Shaza Barghout is one of the first pioneers in the women’s literature in Deir Ezzor. Deir Ezzor 24 network met her and she gave the following speech:

At first, who is Shaza Barghout?

I am an Euphratian woman from Deir Ezzor city, I am a mother and a grandmother. I write stories, novels and popular poetry.
Being one of the first women to start writing in Deir Ezzor, what are the difficulties faced by writer Shaza?
To be from a conservative city, and a conservative family, it was a challenge for me, but I transcended it with my determination to achieve my goal, and I was able to break into the literary sphere without introductions, and all were surprise when I first appeared with my book (Euphratian stories).

– What is the first literary text written by Shaza Barghout? And how did readers interacted with it? And who encouraged you to keep going?

The first text was a story (al-Mullaya), I read it, and the audience interacted with it. I took part in a competition for it and got the first place. The heroine was a real character, that I had known for two years while I was in the countryside with my husband, the pharmacist.

What is the first book you published? And what year was that? And what books followed it?

The first one was a poetry book in the dialect of Deir Ezzor entitled “Euphratian stories” in (1994), that was followed by two works, a collection of stories “the painting” and a novel “paintings on an old country wall” 1996.

Who of the world, Arab, Syrian, and Euphrates writers have influenced Shaza Barghout?

I used to read everything I see. I read works of Arab writers as well as translated books. I first read works of al-Jahiz and al-Rafe’ie, and Kitab al-Aghani (The Book of Songs) by al-Isfahani, then I started reading the books of psychology (the psychology of the oppressed, the psychology of the masses, the psychology of women) and “cities of salt” by Abdul Rahman Munif and many others, and this was Before I started writing, then I started reading novels, stories and books of criticism, to benefit from them.
Actually, I have not been influenced by any writer because I had no special writer, as I found that each writer had some remarkable texts, normal texts, and sometimes texts of low quality, so I tried to read the best works of each writer.

What is the status of the Euphrates environment in Shaza Barghout’s writings?

The Euphratian environment has all of me. It lives in me. I adore every thing about it, its beauty, harshness, specialty, vocabulary, nature, and people, their temperament and tenderness that is mixed with harshness in a unique way. and I am one of them.
Has the displacement you have been living influenced your literary production, as you have been far away from the Euphrates environment that embraced you and your first writings?
The displacement negatively affected my writings. Writing has become difficult for me. I don’t know if this was because of displacement or because of the circumstances of the revolution and the Syrian pain that is still persistent, and is bigger than to be talked about in stories or poetry.

-As one of the first women writers to be known at the province level, what do you say to women in general and the women of Deir Ezzor and the Euphrates in particular?

My advice to every girl in general is “Be yourself”, trust yourself, and if you were different from the girls of your age or your environment, embrace your dream until it has wings and then let it fly with you to your goal.

Through her valuable and varied literary works, writer Shaza Barghout has gone through a journey full of creativity and success, securing her place in the history of the ancient province of Deir Ezzor as one of the stars adorning the forehead of free Syria.
By Safa Al-Turki