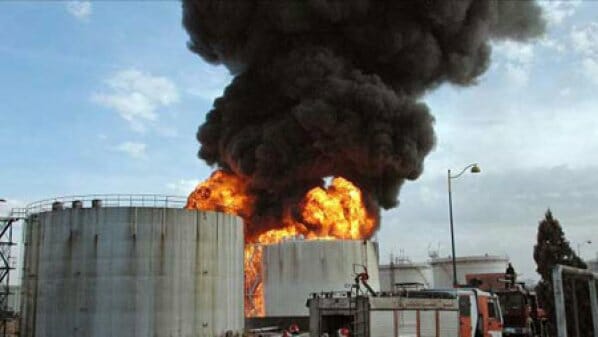 The story of gas and oil in Syria goes back to the eighteenth of the last century when the Assad regime signed contracts with several American, French and British oil and gas drilling and exploration companies to explore oil in the country. After the exploration, it became obvious that oil was available in huge quantities in the eastern region and the northeast part of Syria, in other word, the provinces of Deir Ezzor, Hasakah and Raqqa.

After years of exploration, drilling and extraction of oil operations began, and the deal was that Assad-regime would give the companies a half-share of the profits earned from Syria’s oil. The biggest losers were the people of the region after their vast agricultural lands were taken from them and in return they were offered tiny compensations.

Oil wells started to spread around Deir Ezzor province, with the fire of gas flowing from them and lightening the nearby areas.

However, the eastern region did not benefit from oil as no infrastructures improved and people did not profit from it, with Assad-regime employing workers and experts from other provinces, even though the eastern region was facing a high rate of unemployment and had sufficient manpower and talents.

With the increasing demand for gas, the regime began to invest in the gas fields in order to obtain the domestic gas, Butane, and electricity through the use of gas as fuel to fill in the power plants in Syria.

Because of the availability of gas in large quantities in Deir Ezzor, the gas network, which supplies Syria with gas through thermal plants and turbines spread across the country such as Jandar plant in Homs and Deer Ali, which is linked with several gas factories in the eastern region, began extracting and assembling gas.

The factory is situated 20 km northeast the city of Deir Ezzor and north the Euphrates River in the town of al-Tabiya Jazira, and as its employees have told us, it is equipped with high processing technology. It was established by Koniko Philips to be a factory for gas production and its transportation to the powers plants in Syria. It was also supposed to create transmission lines to Iraq; however, the process stopped as the Syrian Revolution began in 2011.

As the Syrian Revolution began and eventually most of Deir Ezzor province was liberated from Assad-regime, local FSA battalions, mainly Khisham and Khat al-Jazeera battalions, took control over Koniko gas factory after Assad-forces who were protecting the factory withdrew from it.`

Confrontations broke out between the battalions over who should control the Koniko gas factory as it was considered as a primary economic source of income. Consequently, the factory was vandalized for several times, and the workers and engineers working at it had always to repair the damages caused by shelling.

The confrontations between factions like the Army of Jojo, a local military faction, had continued until Nusra took control over Koniko gas factory in 2013 and formed a committee to operate it, allowing the workers who preferred to continue working at the factory to stay. It then began to invest by distributing gas in the liberated areas, and getting electricity from the regime in return of supplying him with gas that was a card used to pressure him.

In the beginning of 2014 and with the emergence of ISIS, both the latter and a military faction called “ Mujahedden Shura Council” exchanged hands of control over Koniko gas factory for a while until ISIS succeeded in fully controlling it in 2014/5/09. It turned the factory into a detention center for those who fought against it, and a place to carry out its mass executions for those  whom the group accused of apostasy and treachery for having opposed views towards its ideology and practices. It also repaired the damage in the factory and started to benefit from it by transporting its gas to Iraq.

Koniko was also used as a military headquarter by the group to command and direct its operations in the province, making it a legitimate target for both Coalition and Assad-regime airstrikes, even if the bombardments on the factory were not accurate as the regime did not see the reason it should destroy Koniko in a time where it was in need of gas to provide electricity in pro-regime provinces.

The situation continued like that for a period of time until Coalition warplanes conducted airstrikes on the gas factory in 2016/3/08, causing heavy damage to it by destroying MCC, Rack Room, Maintenance Office and Work Shop by which the factory is operated and controlled.

The Coalition air raids were aimed at cutting off and drying up ISIS main sources of incomes in Syria.

Koniko gas factory along with other prominent infrastructures Syria has lost in the ongoing war cannot be easily compensated or reconstructed; however, it is the tax of war that must be paid even if it had been at the expense of such well-developed and modern infrastructures.