Dozens of people from Al-Bussairah city, east of Deir Ezzor, demonstrated on Friday, August 14, in the city’s market, according to Deir Ezzor 24 network correspondent.

Our correspondent said that a group of young people from the city organized the demonstration because they were selected for positions in the civil defense units in the city nearly 6 months ago, but officials, including the co-chairman of the autonomous administration’s executive council (Abdul Hamid Al-Mihbash) neglected them despite the need for them in Al-Bussairah and the areas around it.

The demonstrators called on the autonomous administration to provide financial allocation and positions for young people in the civil defense units, as well as job opportunities for unemployed youth.

Unemployment rose significantly in the areas of Deir Ezzor countryside due to the lack of job opportunities and the rising prices, which imposed more difficulties on the people of the region. 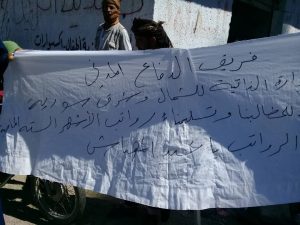