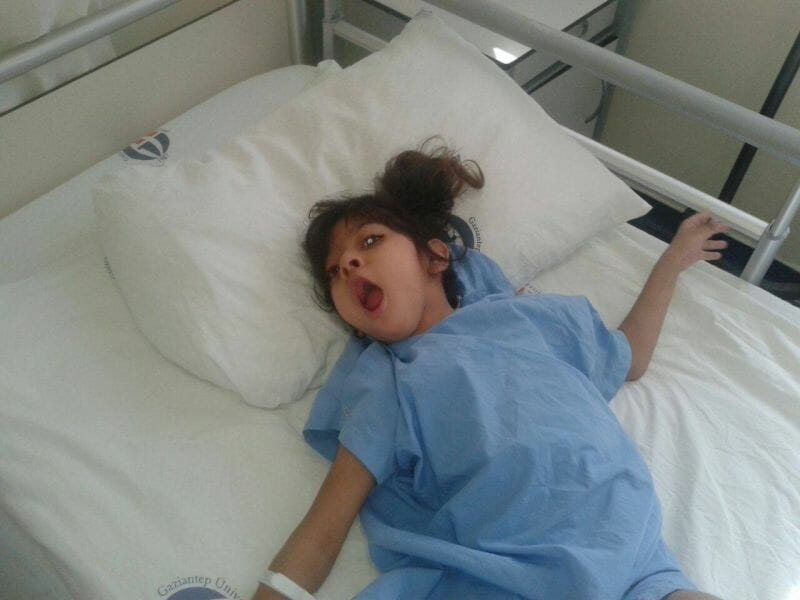 Sometimes, special situations in a society that undergoes a war maybe an exception, but the suffering remains one, especially if the one suffering is a child. In the absence of real medical care and the problem of asylum, the suffering becomes more aching and excruciating. Lack of money, the high cost of treatment and the lack of health institutions that provide full support to these children, and despite attempts by medical organizations to solve the situation of children suffering from disease, the problem still remains due to many reasons. Among them are the large geographical spread of the cases that need such care. The parents who are unaware of the existence of such health care organizations along with the tiny media coverage of the suffering of these children and others are also part of the problem.

Even if the suffering mentioned in this report is only about one child, it still represents hundreds of other situations the Syrian families are going through. Many of those children have left their hospitals in Syria and have moved to other countries where they are facing exclusion, poverty and lack of hospitals specialized in the diseases they suffer from. They also have difficulties in communicating with doctors due to their poor language skills.

7-years-old child, Sadel, has been suffering from polio and Neuro Developmental Delay due to hypoxia since the day she was born in one of the hospitals in Damascus. Her family have tried the best they could to help cure her; however, they have not get to the desired outcome so far. The doctors told them the damage in her brain is huge and the injury is severe, meaning that her recovery would be very slow. Despite all of these, the family, keep searching for any possible way that might save the life of the child Sadil.

They had to cross to Turkey from Syria in a difficult and dangerous journey, putting their lives at risk so that their child, Sadil, would continue her medical treatment in one the hospitals of Turkey, where her health situation has positively improved, even though she keeps suffering from Neuro Developmental delay. The child is still receiving treatment in Turkey at the current time.

Several months ago, the family noticed that the eyes of Sadil were puffy, which pushed them to consult an optician in Turkey who later told them that she had a rise in eye pressure and prescribed for her a medicine. However, the situation of her eye was beginning to deteriorate which caused her family to rush and travel to another Turkish city where the child underwent a laser eye surgery.

After two months, it turned out to the family that the surgery was unsuccessful and the eye’s retina of the child was heavily damaged, meaning that Sadil would not be able to see again and that she needed to do another surgery to detach the retina.

Consequently, the family have entered into a cycle of medical operations. They are obliged to go from one hospital to the other in Turkey, hoping they can find a cure to their child. Sudail is also suffering from a lack of vision in one of her eyes and the family are afraid that they she might lose the other eye. She needs a new medical operation to link or detach the retina depending on the amount of damage in her eye; however, the operation is high-priced. Undergoing a surgery in governmental hospitals would take a longer time during which Sadil risks losing both of her eyes.

This is just one situation among several others where refugees and their children are facing a lack of money and difficulties of undergoing surgeries in Turkey due to the problem of language and the high costs of medical treatment in case they want to be treated in a private hospital, coinciding with an absolute silence from the Syrian Interim Government on these medical issues.

The question often asked is: What is the purpose behind having a health ministry in the Syrian Interim Government if it does not know anything about the hundreds of Syrian people who are facing numerous diseases, and it does not provide them with no support, even to those volunteer organizations established by Syrian activists to offer medical services to the Syrian refugees?

Sadel among other children suffering from chronic diseases are buried in the mists of time and, at the same time, caught between disease and seeking refuge.