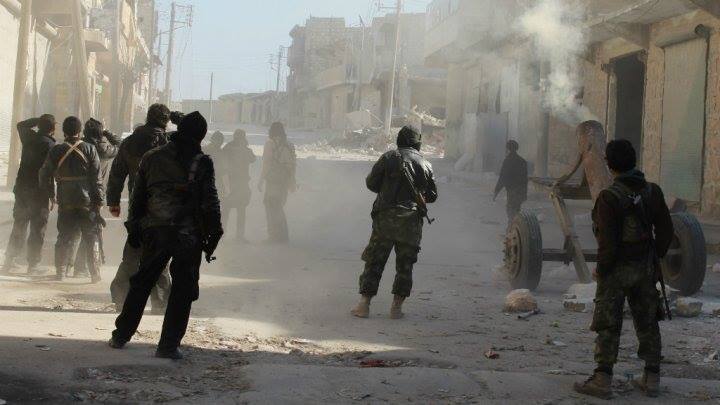 Over the past two days, ISIS managed after heavy clashes with the regime forces to overrun several key regime positions in Al-Rusafa district of Deir Ezzor, even though the latter was backed by intense Russian airstrikes. The coalition warplanes were also seen flying over Deir Ezzor province after ISIS halted its offensive on Al-Rusafa district.

ISIS managed to advance in Al-Rusafa district after it had targeted the regime positions in the district with a VBIED followed by an assault on the remaining positions. After 24 hours of heavy fighting, 11 regime fighters were killed while ISIS sustained some casualties, 5 of its members were killed too. Meanwhile, Clashes between ISIS and the regime forces continue west the city of Deir Ezzor on many fronts, including the hill of Al-Ruwad, Brigade 137 and Deir Ezzor military airport east the city.

‘’ ISIS shelled Deir Ezzor military airport with heavy artillery and mortar which led to the deaths of a number of regime forces, including an officer known as Ahmed Abdel Qader Naama from the city of Aleppo, D24 correspondent said.’’

Since Russian warplanes started their airstrikes last September, they have been targeting civilian areas and residential buildings in Deir Ezzor province contrary to Russian media claims. The Russian indiscriminatory air campagain against the province of Deir Ezzor has claimed the lives of more than 350 civilians, most of whom were women and children. Entire families have been massacred in the deadly airstrikes.

The US-led coalition warplanes have conducted several air raids against ISIS targets in Deir Ezzor. Among the targeted areas are ISIS-run oil fields and infrastructures.

The coalition warplanes conducted 12 air raids on ISIS positions in the city of Albu Kamal near the Iraqi border. They also bombed a number of ISIS-run oil fields in both the villages of Al-Jafra and Jadid Akidat. Moreover, US-led airstrikes destroyed a number of ISIS checkpoints in the Industrial district of Deir Ezzor and the area of Al-Hizam Al-Akhdar. A number of ISIS militants were reported killed in the airstrikes.

It is worth mentioning that the eastern countryside of Deir Ezzor along the Iraqi border has recently witnessed intense coalition warplane activity. Anti-ISIS operations have also increased over the past few days, mainly in Albu Kamal where a group of unknown gunmen ambushed and killed 4 ISIS members as they were raiding a car near the power plant in the city.