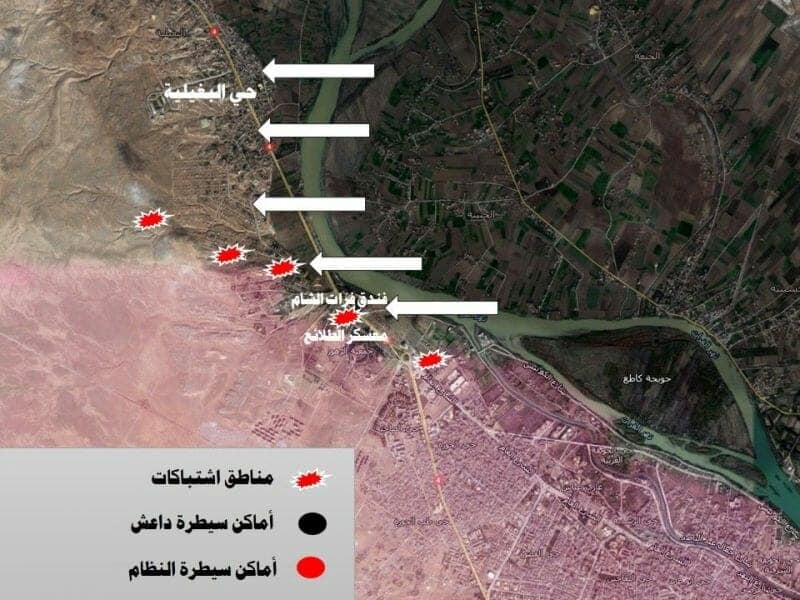 ISIS launched a massive offensive against regime forces in the western countryside of Deir Ezzor today, during which it succeeded in gaining control over several key areas. The group also captured al Thura Mountain situated near Deir Ezzor military airport after an attack yesterday. A number of ISIS militants have also attacked the regime military barracks in al Qalb hospital in the city of Deir Ezzor.

After a group of ISIS militants sneaked into the town of al Bughayliya in the western countryside of Deir Ezzor from the Euphrates River using boats, they stormed the town and succeeded in taking control over it following heavy clashes with regime forces this morning. During the attack, ISIS executed 18 elements of the regime national defense forces (NDF) and captured 25 others, DeirEzzor 24 correspondent in the western countryside of Deir Ezzor said.

On the other hand, heavy clashes continue between ISIS and regime forces in al Sai’qa military camp and near brigade 137 in western rural Deir Ezzor, coinciding with warplanes heavily bombarding the villages of Ayash, Muhaymida, and al Hissan. The regime has also intensified its airstrikes on ISIS-held neighborhoods in the city of Deir Ezzor. ISIS has responded to regime bombardment of its held areas by shelling al Jowra and al Qusour neighborhoods with mortar and heavy artilleries.

A map showing the current military situation in Deir Ezzor after ISIS offensive .