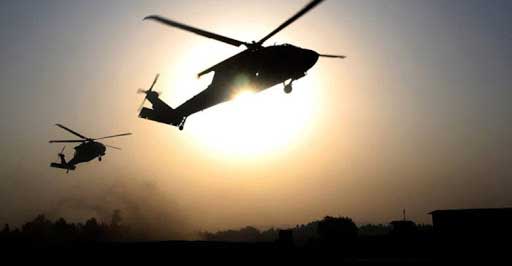 Today, Sunday, International coalition forces carried out an airdrop operation in Deir Ezzor countryside, amid security operations it is carrying out in the region, with the participation of the SDF.

International coalition forces carried out the operation in Ash-Shahil town in the eastern Deir Ezzor countryside. It targeted a house in al-Shabaka neighborhood, and exchanged fire with three persons believed to belong to Daesh and killed them during the confrontation. The three persons were known to be IDPs from Suweidan Jazeera town.

This coincided with an airdrop operation the coalition forces carried out at dawn, targeting a house in Azzir village, adjacent to Ash-Shahil town, to arrest wanted persons accused of belonging to Daesh.

The attacking forces called through loudspeakers on the persons present in the house to surrender themselves, but they refused and clashed with the forces. The operation resulted in the injury and arrest of the wanted persons, and the burning of the house they were in.

Coalition forces are deployed at several military bases in eastern and northeastern Syria in the areas controlled by the SDF. It carries out search and arrest campaigns against Daesh cells in Raqqa, Hasaka and Deir Ezzor.